I've got a lot of works in progress right now, so it was really nice to come home from a very busy weekend (Bear and I got married last weekend - just a little busy, eh?) and complete a project.

For this art card, I stamped the background with a hand-carved lino block given to me by a friend, which I hand-colored with Copic YG93. The flowers are punched out of art paper from my collection, and the little moth is a found object colored with Copic B21.

I love the way the low-contrast colors on the flowers allow the little cat to gradually emerge from the background! This is my first collaged ATC, and I am happy with it.
Posted by CrowGirl on Wednesday, September 26, 2012 3 comments:


As a long time fan of good illustration, it is SO exciting to watch the next generation of illustrators coming up. One such is Emily Hughes, who blogs over at Emily's Rather Large Adventure and who recently completed her illustration degree.

Emily's work reminds me of a bit of the children's books I loved growing up in the 70's, but at the same time, it's fresh and original. She uses soft, natural color palettes. Her lively lines really bring her work to life. Even in illustrations where the characters are standing still, like in Norwegian Wood, they are vividly alive, caught in an instant between movements.

I need to learn to capture that sense of motion in my own drawings and illustrations.
Posted by CrowGirl on Monday, September 24, 2012 No comments:

I found out that our local art supply recycling place, MECCA (Materials Exchange Center for Community Arts), has a monthly ATC Swap. ATCs are artist trading cards: miniature works of art on 2.5" by 3.5"backgrounds. I thought it would be great to put some mixed media ATCs together and go meet other local artists. That, and making a dozen or so miniature collages sounds really fun.

This is the first one, with nothing glued down yet. It's interesting to go back to a smaller scale, with collage. I found a picture of a little orange kitten who reminds me of Toby Fat Butt, and some appropriate wings for him. What I haven't figured out yet is what the little guy is looking at. I'm planning on coming up with something amusing for him to be stalking, and embellishing the background with color and pattern.

Posted by CrowGirl on Thursday, September 20, 2012 No comments:

Joaquin Baldwin made this wonderful piece of animation. This is so beautiful, I cried tears of joy. The colors are so soft, the textures so rich, and the visual composition of each shot so perfect. Much to learn from it, I think, for collage.
Posted by CrowGirl on Monday, September 17, 2012 No comments:

It's funny, but when I draw, I tend to work small, usually on a background no larger than 8" by 10", and often smaller. Collaging, I'm finding, makes it feel natural to scale up.

I found this painted canvas at BRING, a local recycling/building material outlet. It immediately became something of a logical background for this collage idea inspired by a found print of a painting of a young girl by Pierre Auguste Cott, c. 1870. The canvas is about 18" by 24".  When it's done, this will be one of the largest pieces I've ever attempted.

I'm planning to rework this canvas pretty extensively - probably very little of the original paint will show when I'm done. Nothing is glued down yet, and I expect that the composition will end up being pretty different too. But that's one of the things I love about collage: watching the first glimmerings of an idea start to play themselves out, changing and evolving as they go.
Posted by CrowGirl on Friday, September 14, 2012 3 comments:


Here's my Wednesday work in progress - a mixed media collage (quelle suprise, no?) inspired by the idea that we live, move and breathe discovery. I'm pretty happy with this composition (nothing is glued down yet), but I'd rather like to try luna moths instead of the butterflies. The scale is pretty good, though. I was worried about the butterflies overwhelming the scale of the astronaut, but seeing it at a distance, I think it works. Moths might fade slightly into the background and make for better visual balance.


For the background, I took a piece of matboard and hand-colored the background with Copic B34: Manganese Blue. I really like the rich, watermarked texture I can get with Copics. Then I used a cotton ball to sponge silk paints in blue and black over the top of that. Why silk paints? Because I have them and I haven't been using them for silk painting. They dried quickly and went on nicely. I'll be interested in seeing how the silk paints take the final top coat of gel medium.

I think the type needs to be bigger, more readable at a distance. It's an important part of the composition, and those words were my springboard into the concept.

Every Monday, I'm going to try to share something or someone that inspires me.

While looking for mixed-media collage inspiration online, I came across Lisa Kaus and her lovely body of work. My reaction can be summed up in one word: BLISS!

Ms. Kaus's style is light and colorful, lyrical and sweet. Her work has appeared in Somerset Studio and other publications. One of the things about her artwork that appeals to me most is the orderly nature of her collages, such as "Joy Within". She calls this style "Gridlocked" and teaches workshops on it. Taking one of Lisa's classes has been added to my list of dreams.

I Feel An Obsession Coming On


This has been coming on for YEARS. It's like learning a new visual language, but finding that I already have half the vocabulary tucked away in shoeboxes and drawers. I am so very excited about discovering a new way to create characters and hint at stories.

So, for this particular piece, I started with a piece of vintage ephemera that got crunched in a tragic shoulder bag incident. For the background (matboard scrap) I spritzed ink over a tree stencil. The wings, crown, and flowers came from an old and terribly tattered 1927 school reader, and the watch face from a 70s era back issue of AD. The whole was assembled with Golden Soft Gel (gloss), and I layered a coating of the same over the top for texture and sealing.
Posted by CrowGirl on Sunday, September 09, 2012 No comments: 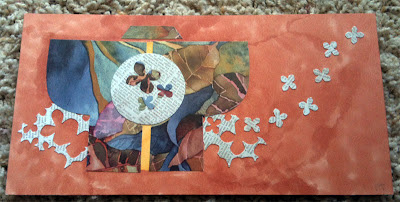 Over the last year or so, I've picked up quite a few books on collage and mixed media art. The form intrigues me. It's visually rich, borrows shamelessly, incorporates ephemera, and gives new life to all sorts of imagery. It's also a challenge for me, because my personal visual style tends to be very clean and simple. Collage challenges my boundaries. A lot of people don't know when to stop; I don't know when to keep going. 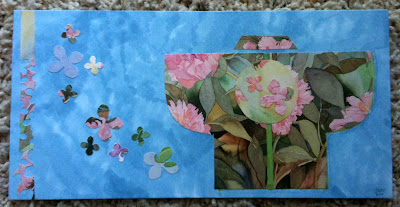 One of my big things recently has been decluttering. Getting rid of things that I don't use to make room in my life for the things that I do. And last week, I decided that if I hadn't made use of my collaging books and materials in the next year, they were all going to have to go. That decision must have seriously kicked something loose because I had an almost preternatural urge to create these happi coat collages. 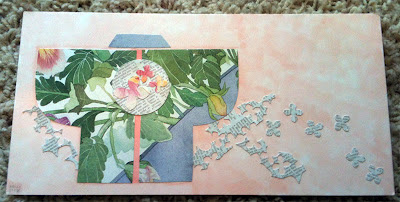 Inspired by a similar collage, I drew the template for the coat onto chipboard and cut it out by hand. The background is mat board hand-colored with my Copic pens. The coats and embellishments come from my collection of collaging materials. I was delighted by how different my versions are from the art that inspired them.
Posted by CrowGirl on Tuesday, September 04, 2012 3 comments: