And the Dervaeses have NOTHING to do with it.

When I was 13, I came across a copy of Alicia Bay Laurel's Living on the Earth

. It is one of the handbooks of the "back to the land" movements of the 1970s, and I found it inspiring beyond belief. I dreamed of finding a little plot of land somewhere in the woods and living a self-sufficient (and groovy!) life. I read Ernest Callenbach's Ecotopia

when I was 15 or so, and since hey, I live in Ecotopian territory, the ideas therein never really left me. These and other books from the 70s that I found myself reading while growing up in the 80s formed part of the internal bedrock for how I want to live my life. Especially Ecotopia, a place in the imagination which some people now call Cascadia.

For the last five or six years, I've been reaching more and more towards living a sustainable, independent, low-impact life. When I had a yard, I had raised bed gardens, grew a reasonable chunk of my own food, and collected catch-water from the sink and shower to water the beds. I haven't had a yard for the last couple of years, but I've done container gardening where I could. But urban homesteading is more than gardening or growing food. It's a mindset as much as anything.

To me, urban homesteading is about creative (especially in the sense of being the opposite of destructive) use and reuse of resources. It's about learning skills that make you less reliant on outside resources or systems. With my current, tiny apartment, I don't have room for more than a few planters filled with herbs and greens. We're going to try growing a blueberry bush in a big ol' tub and see how that goes. But I do have room to make my own household cleaners out of low-impact materials like baking soda and organic castille soap, vinegar and lemon juice. I make yogurt and butter from milk and cream, and I can brew my own kombucha in my itsy bitsy kitchen.

I ride my bike when the weather is good. I shop at thrift stores and buy lots of my books used. When I get in the car, I try to make every trip count. I'm going to sew more of my own clothes, using second-hand materials. In short, I'm going to go on working to reduce my impact and produce as much for myself as I can. In short, I am an urban homesteader.

The man who is attempting to claim ownership of the terms "urban homestead" and "urban homesteading" –terms that have been in common use to describe a movement of thousands of people for the last forty years– claims to be the founder of urban homesteading. I say, that's a load of high-grade organic fertilizer right there. There are so many people who helped to lay the foundations for the modern movement, that it is beyond arrogant and self-centered to claim to be "the founder." I didn't even know who Jules Dervaes was until I came across the name while looking for Kelly Coyne and Erik Knutzen's blog.

Last year, I bought a copy of The Urban Homestead by Coyne and Knutzen.

It's a really great, well-written book with lots of solid, practical, easy-to-do ideas and it was published before Dervaes even applied for the trademark. It got me started on making my own cleaners, instead of buying all of them from companies like Seventh Generation. If you've never really heard about urban homesteading and you're interested, it's one of the best introductions to the topic I can think of. And it was a great inspiration to me, to take my gardening experience and craft skills and do much, much more with them.


The Dervaeses' actions are an unbelievable attempt to co-opt and own words that describe how thousands and thousands of people live their lives. For all their claims of being distinctive and unique, I probably never would have heard about them except for the uproar over their greedy actions. They owe a large part of their audience and support to the people and institutions that came before them. Writers like Alica Bay Laurel and Ernest Callenbach. Helen and Scott Nearing. Mother Earth News. The Goodfellow Catalog of Wonderful Things. The Foxfire books. Ursula LeGuin's Always Coming Home. These are the founders of urban homesteading and they always will be.
Posted by Cricket on Monday, February 21, 2011 2 comments: 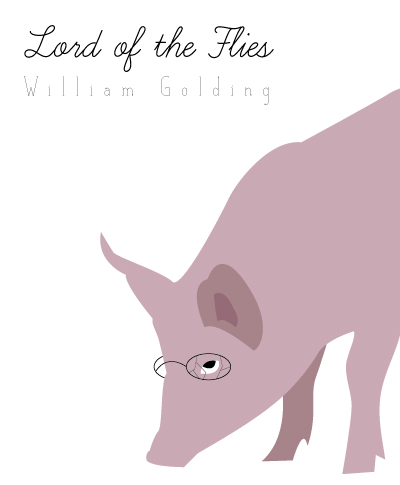 The Fox is Black is sponsoring a neat contest, in which he challenges folks to come up with new book covers for old classics. This is an early draft of my first idea. I've played around with the type a bit and I'm not quite sure if this is the right treatment. I can't do everything in Prima09, though, much as I'd like to. Right?

I like the subtlety of my approach here. It's very clean and soft, very contrasty to the gritty, disturbing story of Lord of the Flies. I like pulling off that sort of contrast when I can. It might be interesting to add a photographic element, perhaps of some idyllic tropical beach. Anyway, fun!
Posted by Cricket on Wednesday, February 02, 2011 No comments: