Dragons, Looking Ahead, Looking Back

Time to start getting ready for this year's Orycon Art Show. It's something I've occasionally done in years past, but never with the sort of momentum I feel going into this year. I didn't do the art show last year, for various reasons. Instead, I attended art panels and classes at the convention and enjoyed myself a great deal.

During one class/sit down and draw gathering, Jeff Sturgeon took a look at what I was working on, which happened to be this piece. He said that it was at least as good as a lot of the illustrations in published children's books, and that I should really consider entering it and other pieces like it in the next art show. !!!

As you can imagine, that was a pretty enormous boost for me. Jeff is a well-respected artist and illustrator and I've admired his work for years. Since then, as I've grown as a designer, I've found that the parts of my job that I like best are those that involve illustration, and I'm becoming more determined to find a way to do more of what I like best. 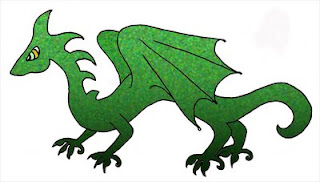 Hence, art show! SF/F convention art shows are a great place to show personal work. In my case, fantastic little beasties like the dragon above. I wanted to scan him in and play with him before hand-coloring the original drawing and creating a background. The original should be in the show, unless I manage to muck him up. I'm going to be experimenting with some marker effects. I love his curves! And his paws are awesome, definitely among the best "hands" I've ever done.
Posted by Cricket on Wednesday, July 27, 2011 No comments: