Mr. B and I just got home from a long weekend  in Las Vegas with our good friends Sarah and Grant. While it is SO not, ultimately, my kind of place, I still had a blast walking around and filling my eyes with the spectacle, as I generally do when the opportunity presents itself. There is always something new to see. This is partly because I am no longer 22 years old and able to run around for 24 hours at a stretch and therefore will never get to see everything in one trip (honestly, it's humanly impossible anyway), and partly because the place is eternally under construction or renovation of some kind.

I had a lot of time to think while we walked. I'd like to share some thoughts under the jump.


We walked through a number of art galleries with some seriously fantastic art. One was the Martin Lawrence gallery. I'd been to the one in New Orleans almost ten years ago, and if you're ever in a city where they have a gallery, you'll want to go. Seriously. The art they display leaves me gobsmacked: signed lithographs and etchings by Picasso and Marc Chagall (oh, one of my favorites!), Felix Mas, Erté, Andy Warhol...it's like wrapping myself in the pages of an art history book, grown vasty.

I also learned about a few artists whose work I'd never seen before, like Vladimir Kush and Peter Lik. They have their own galleries. I love that there's always something new to learn in the world, although to be totally honest, I kind of hate it too, because I wonder how I ever got this far without learning some of the things I've learned in the last few years and feel dumb because I didn't know them twenty years ago. The love has to be stronger than the hate, though. I have this thirst to learn and grow that should never be quenched.

I have to admit that while I really liked the ideas in Kush's works, I didn't actually like most of the finished pieces. He works mostly in oil, which isn't my favorite. Yeah, I'm a philistine of some kind, for sure. I was, however, riveted by his etchings and watercolors, which were amazeballs.

One thing I noticed in all his work was that he wasn't afraid to revisit ideas or reuse visual motifs, which is something that I've been afraid to do. (Lazy! Unoriginal! Blah blah blah!) But here is this fabulously successful artist (let's face it, the rent for that gallery in Caesar's Palace, just around the corner from the most ridiculously ornate and amazing fountain I've ever seen, must be astronomical), doing just that. It was liberating. 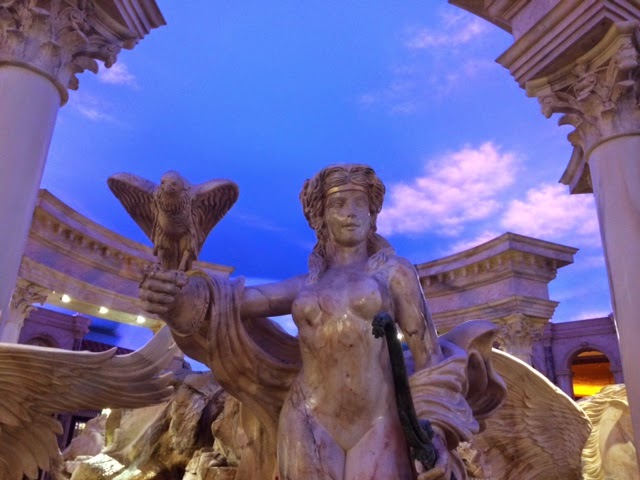 *Who, by the way, just lovingly referred to me as a "devil spider woman" because I trapped him in my wrap cardigan - that's love for you.
Posted by CrowGirl on Monday, April 28, 2014