Coming soon to a mailbox near you 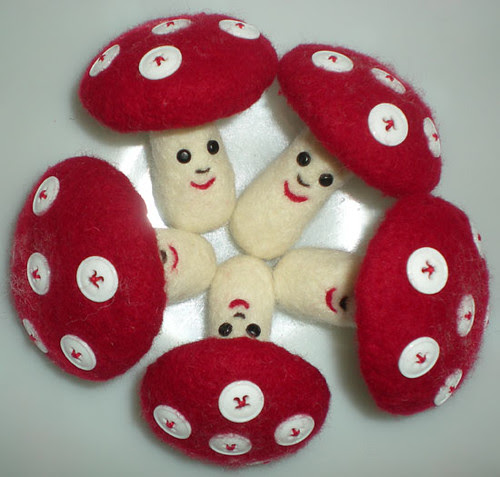 Finished mushroom dudes! I took the picture with them inside a pyrex bowl, which lit the shot pretty nicely. The white fuzz on the red isn't nearly so pronounced in person, though. I'm so excited to be done. They were awfully fun to make. The stems are a little bendy, although they bend right back into place and tend to stay there. I'm thinking about putting them in yogurt cups to ship.

The next series of mushroom people will be made with vintage buttons. I was puttering around at Stars and found a few bags of vintage buttons on sale. Just imagine, a couple of months ago, the only buttons I had in the house were ones that had fallen off clothing and were waiting to be sewed back on. Now I have a collection of buttons waiting to be made into cute things.