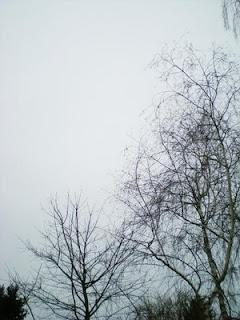 I grew up on the dry side of the Cascades. During the winter it snows from October to sometimes as late as March, with a bit of rain now and then, but nothing like the rains here in the valley. The air is dry. In the summer, it cools down quickly at night. That's one of the few things I miss about living in the high desert: the refreshing coolness of the evening, after a day of sun and heat. The contrasts. When I moved to the valley, a few months after turning eighteen, it took me a long time to realize how different the climate is here - after all, it was still Oregon, wasn't it? I noticed that there were many, many more trees on the hills surrounding Eugene and that it didn't snow nearly so much, but I missed the subtle difference in humidity. We may complain about humidity in the valley, but after visiting Pennsylvania and Japan, nope, it's not really all that humid here. Despite the fact that it rains for about nine months out of the year. Weird, eh?

Every once in a while, something will remind me of those early days in Eugene - one of the best times of my life. I had a flash of it this morning, coming in from taking the recycling out to the curb. Something about the chill and the damp and the slight trace of woodsmoke on the air, and coming into the warm, dimly-lit kitchen, shrugging out of my hoodie and lunging for my cup of tea... I don't know why, but it brought on a sensory memory of a similar morning many years ago. Not one specific morning, but the general sense of the place and time I loved so much. They say you can't go home again and I know that this is true, but sometimes it's possible to duck in, just for a second, and know that it's still there, waiting for you to find a way to bridge that impossible gap and return at last.
Posted by CrowGirl on Friday, February 13, 2009